We received a call from a lady in Timoleague that had a feral cat with a sore eyes. We when we got there we say a number of cats and kittens. The carers said one of them had a sore eye. We waited for the cat to show up but in the mean time we spotted a grey tabby with some mucus in his eyes. Assuming this was the cat the lady spoke about, we trapped the cat. We called the carer to ask her and she said ‘no it not that one’ it’s ‘the white one’ so we continued to trap. Eventually we saw the cat with the ‘sore eye’ our first reaction was oh **** the cat’s eye had completely burst. We trapped the cat and contacted the vet.

He was immediately brought to the vet and the operation to remove the eye immediate ensued. The entire eye had exploded through the membrane leaving the cat blind in one eye and constantly exposed to infection.

The vet had to remove the remainder of the eye and stitch the eye closed. Without this operation the cat would have died a slow and painful death due to constant infection.

We decided to name him Captain Jack after his ordeal and is now back with is feral family. 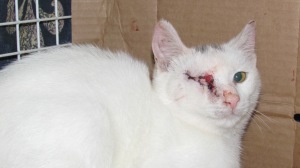 After talking with the carer we decided that it would be a good idea to start another village project.

Timoleague is a small but vibrant village in West Cork. Like most other villages in Ireland it also has feral cat population. Because of our work in other villages in West Cork the word has spread. Timoleague residents want to neuter the cats in their area. With the help of local residents we are establishing a census of the village of the domestic and feral population and documenting all cats. We can only estimate at the moment of how many cats are they but the estimates are coming back at about 30 plus cats. 15 of these cats have already been privately funded and we hope to raise the money locally to neuter the rest of the cats. If you would like to contribute to the neutering fund and help Captain Jack fellow ferals you can click the paypal link and donate. https://www.paypal.com/cgi-bin/webscr?cmd=_s-xclick&hosted_button_id=EJ5AGXUVHWSM6