We constantly get calls from people that have sick cats. Following a process of elimination we determine if the cat needs emergency care or not. I arrived for a trapping last night and, low and behold, the carer had fed the cat two hours before I arrived. The probability of the cat coming around again was pretty slim. I was informed that he had
not been looking well for a while. I hung on a bit longer to see if he would show…and he did. The most amazing tom cat approached the patio, holding his head up high, walking tall with all the dignity he could muster. But unfortunately he was in a bad way. He had a large laceration on the side of his neck. He appeared dirty and dishevelled, and broken. Cats are amazing creatures. No matter what happens to them, what they have to go through to make it through another day, their dignity always remains. He looked at me with the two most glorious eyes I have ever seen on a cat. I swear to god he knew I was there to trap him. I put out the trap and filled it with food. He was standing about three feet away from me, saliva dripping from his mouth onto the ground. I turned to him and asked him to go into the trap so we could take his pain away. He looked at me and walked straight into the trap. I know this sounds silly, but it was the nearest thing I could describe to a spiritual experience. The handsome boy was taken home to the feral shed. Jim transferred him into the hospital cage with some warm vet bed and food.
I brought him to the vet today. Most of his teeth were missing and the others were rotting. He had Plasmacelled Pododermatitis on three of his paws, was covered in lice and positive for FIV.
He went for his final sleep today in the vets. I listened to his heart beat after the lethal dose injection was administered. His heart kept beating for a short while, slowed down, and then stopped. Oiche mhaith mo Croí. Maggie & Jim. 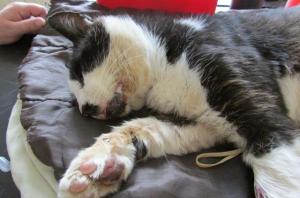 Text costs €2.  Community Cats Network will receive a minimum of €1.80.