Posted on February 2, 2014 by Community Cats Network | Leave a comment

This February, we want to hear about your stories!

Have you ever rescued a kitten?   Have you helped some stray and feral cats?  Did you save the life of an injured cat?

Then, we want to hear from you!  Tell us all about your story.

All stories will be published on our Facebook page during the month of February and the public will be able to vote for them by “liking” them.  The three stories with the most likes will be published on our website and win our 2014 calendar (which features our own stories of the cats we have helped); the winning story will also get you a goody bag for you and your feline friend.

To enter the competition, email a photo and the story to fbcommunitycats@gmail.com.  There is no minimum or maximum length for the story, but you can only submit one photo per story.  You are however allowed to submit more than one story.  The competition will close on the 28th of February.

And to get you started, we have a story from one of our volunteers…

Gypsy, the kitten who changed the lives of so many cats 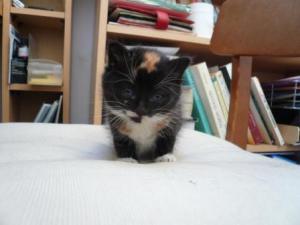 When I started working in Ballycotton a few years ago, I was delighted to find a family of cats living at the back of the restaurant.  I loved cats and was actually looking to adopt a third one to join my family.  I started to help feeding this feline family in the hope of taming them.  Although I was able to touch them, I was never able to pick one up.  At the time, I knew very little about feral cats.

The following summer, the kittens had grown up and one of them brought her own kittens to the back of the restaurant.  The kittens were a bit friendlier this time, but one kept being bullied and looked quite underweight, so I found him a home where he would be well looked after.  Only a few months later, another tiny kitten was found in the yard, abandoned by her mother.  Another home was found for her.

The following year, as I was coming back from a week holidays, the lads called me to have a look at something in the yard.  They had a big grin on their face.  There was another mother and two very small kittens.  It was a bad winter and I was quite worried for the two little ones.  I called a rescue group for some advice and was told to make sure that the mother could get shelter and had plenty of food.  If the kittens did not cry and seemed fine, then I should leave them with the mother.  The lady added that the mother and her kittens should be trapped and neutered.  This was the first time I ever heard about a cat trap…

When I went back to work the following evening, I first checked on the little feline family, but could only see one of the kittens.  I heard the 2nd one crying all evening.  At the end of my shift, I decided to act.  There was something wrong with the kitten.  One of the patrons helped me and found the kitten in the brambles.  She was covered with dirt; it seemed that her mother had given up on her.

I took the little one home with me.  I cleaned her and kept her warm against my body, trying to give her a bit of mushed up kibbles every so often.  She was barely eating for me and I was not sure she would survive.  As soon as the vet was open, I went over to buy some kitten formula.  Gypsy soon regained her strength.  After a week of bottle-feeding, Gypsy decided she could eat on her own.

Gypsy grew into a beautiful and healthy cat living a happy life in my house.  Life took me a bit away from Ballycotton; however, I could still remember the words I had been told about neutering those cats.  I would love to help them, but how?  I already had to look after my own four cats and, surely, nobody would be willing to pay for the neutering of these cats. Yet, I knew I had to find a way to get it down.  I would regularly discuss this subject with a friend who was a native of Ballycotton and we were thinking that maybe we could organise something to raise the money needed.

It took time, but I eventually started to organise something.  In the mid-time, I had met people who could help me with the trapping and a fantastic vet, Sinead, who was willing to support the project by offering discounted rates in order to help her local feral cats.  I had also discovered by then that there were many more cats in Ballycotton than the few living at the back of the restaurant.  My idea to raise the funds was to appeal to the community.  I thus prepared some documentation and donation sheets that I went to distribute around the pubs and the shop in Ballycotton.

When I walked into the shop and asked the woman behind the counter if she could help me, her face lightened up and I thought she was going to hug me.  I had heard of Breda, who was often rehoming kittens.  In fact, Breda had been doing the same thing as I had, but for many more years; she had been helping the kittens of Ballycotton by finding them homes.  When I came to her with my idea, she was really enthusiastic and gave a new impetus to the project by organising a coffee morning, which was a great success.  Enough funds were raised to carry this project out.

I had never used a trap before, but I had the best cat trapper with me: Maggie, and her husband Jim, taught me all the tricks of cat trapping.  In one week, we made a significant start to our project by trapping and neutering over 20 cats; the community was really supportive and even the kids helped us with the trapping.  Breda kept getting information about where the cats were and the project kept going.  It is still going now as the cats in the village are closely monitored and any newcomer is immediately neutered.

The TNR project of Ballycotton is the inspiration behind Community Cats Network.  If we could do it in Ballycotton, we could do it elsewhere.  Thanks to little Gypsy, hundreds of cats have been helped by being neutered.  Thank you Gypsy for opening my eyes and changing the lives of so many cats!